The issue of child labor is a global issue which is planned to be addressed through comprehensive and sustainable manners. The commitment is expressed in the form of collective ideals with the motto “Future without Child Labor” (Masa Depan Tanpa Pekerja Anak).  The global movement is built as a response to the concerning reality of world’s child labor.  The movement is kept on accelerated by involving all stakeholders and manifested in the form of a Roadmap for Achieving the Elimination of the Worst Forms of Child Labor of 2016. The commitment to implement the roadmap becomes a strategic agenda for all parties throughout the world.

Children in the category of child labor generally experience dropouts and live in neglect as well as working in various work sectors such as agriculture, plantation, fisheries, even on road. Child laborers tend to work for long hours in an exploitative condition. Although there is no comprehensive data available, child laborers in the worst forms of job have been found in work sectors of prostitution, drug trafficking, mining employment, deep sea fisheries employment and household work.

In the context of Indonesia, child labor in general, and particularly in ASGM, is a national problem that requires immediate and continuous actions due to Indonesia’s commitment for free child labor realization by 2022.

The aim of the training is a part of AGC and local partners’ effort to give contribution to the small-scale community gold mining, as well as taking part in actions undertaken by the government and other stakeholders in tackling child labor that contributes to the global achievement of the world’s roadmap.

Ms. Putu Elvina as a commissioner of Indonesian Child Protection Commission who was one of the key trainers participating in the training, stated,”It is important to equip our enumerators with sufficient skills in order to equip them to find the right data in the field and also to be able to produce a valid report for the future of ASGM sector in Indonesia”.

Meanwhile, Ms. Titik Hartini of AGC added that the results of child labor mapping in ASGM for Central Kalimantan and Manado will create child labor profiles and recommendations which will be submitted to policy makers from ministries related to small-scale community gold mining.

The group of Lentera Kartini and AGC traveled for almost 4 hours to Parenggean District, Kotawaringin Timur Regency. The purpose of the visit was to conduct a training trial on child labor assessment tools.

Titik Hartini as the Training and Development Manager stated, “The assessment tools test is necessary for local partners so that they are more capable in carrying out data gathering on child labor.”It requires the skill to dig up information and the right set of questions so that the generated field data can be accounted for, added Titik.

“It’s quite difficult to meet the children in Bukit Harapan Village. Probably, it’s because we visited the area during school time,“ said Pipit Setyorini, the Training Specialist of Lentera Kartini.

But the field overview was not in vain. Some children were gathered and interviewed by AGC’s local partner, Lentera Kartini.

Bukit Harapan, Parenggean District, Kotawaringin Timur Regency, Central Kalimantan is one of community gold mining areas. There are 187 active gold miners. Most of them are from West Java (migrants).

In the area, Lentera Kartini in the context of testing the Child Labor Assessment tools did interview with some children. They found several cases of children getting involved in labor.  There are child laborers and child workers in both mining sector and other sectors supporting mining.

Child workers are children who work to help their parents,  practicing responsibility or other skills within a short term outside the school time, and there are no exploitative elements within the work.

Meanwhile, child laborer is every child who does works that have disruptive nature and intensity. The work also endangers the children’s health and safety as well as their optimal growth, be it physically, mentally, socially, and intellectually. 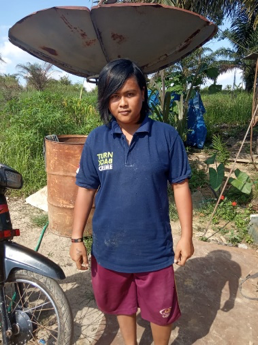 Leviana is a 22 years old female miner.  She began working in the community mining of Bukit Harapan at the age of 16 for one year long. When she almost reached the age of 17, Leviana married a man of her decision whose age was 20 years old. After her marriage, she tried her fortune in the culinary business. She opened a small restaurant.“The profit was quite good. I could get a million to a million and a half rupiahs overnight,” said Leviana. However, the situation was not always good, after 6 months of opening her business, she had to close her business. The condition forced her return to work in the community gold mining of Bukit Harapan Village since April 2019.

Leviana only experienced school until the first grade of junior high. Due to a chaotic family condition, Leviana was frustrated and vented her frustration by participating in wild motorbike competition existing around the area of Desa Bukit Village.  Little Leviana felt that she couldn’t do anything to fix her family conditions.  She turned into a bad girl due to the frustration. “The marriage of my parents was not harmonious, at that time I thought that if I have an early marriage, my father would stop whatever detrimental behaviour he did to the family. But I lost hope. Turned out my father didn’t change. Now I’m accustomed to this condition,” explained Leviana.

It is undeniable that Levina regretted her condition. “If only I can turn back time, I wouldn’t drop out of school, I wanted to keep on studying and become a Policewoman, but it is no longer possible,” said Leviana.

During her work in the community mining, Leviana is often tasked with sifting.  During the sifting, Leviana also dives in the small river to find ores.“I work for 7-8 hours a day for 6 days. I dive into a nearby river without using any supporting or safety tools.  Even though it is tiring, I am happy to earn money,” Leviana told us. However, the woman’s income does not necessarily depend on the amount of ores refined into gold. “If I’m lucky, I can get 400-500 thousand rupiahs per day or two, well it depends on luck,” she added.

Even though Leviana has grown into an adult woman, regrets are still visible on her face. She hoped her children will not experience such difficulty. “By working in mining, I am able to get income. I give some of it to my parents and the keep the rest for my children, household needs, and myself,” she said. 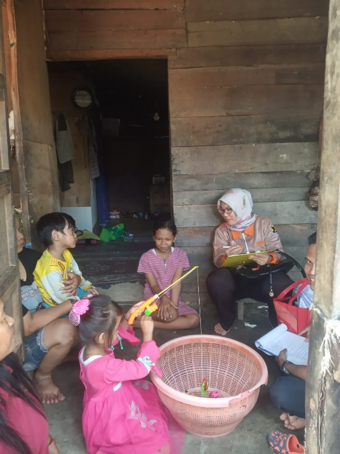 Shinta was born in three siblings of a mother from Garut, West Java. The little girl is now 12 years old, but her small stature makes her look younger.

At the moment, Shinta attends school in a local elementary school. Aside from attending school, she also takes care of her mother’s grocery shop located beside the house in which she grew, near the community mining area of Bukit Harapan.

“After school (12 o’clock at noon) I usually help my mother until around five o’clock in the evening. I work for five hours a day in a week,” said Shinta.  Nevertheless, Shinta admitted that she enjoyed her youth like other children of her age. “My playing time is one hour a day,” she added.

Shinta also said that from the work she did; she didn’t get any payment, but she was happy to help her mother in fulfilling their household’s needs. “I’m happy with my work because not only I want to help my parent, but I can do the work while playing,” admitted Shinta. 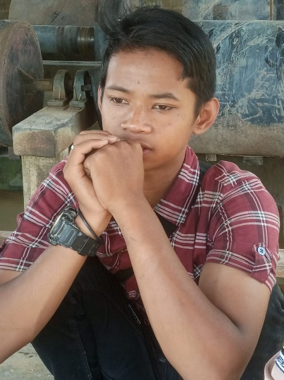 Yusef was born in 2002 in the Area of Community Gold Mining of Bukit Barisan and now he is at the age of 17 years old.

As the second child of four siblings, Yusef decided to drop out of school as he entered the fifth year of elementary school.  “The reason why I stopped going to school was that I didn’t want to continue…  I like playing more (than studying),” said Yusef.

But as time went on, when he turned 16 years old, Yusef applied for a job as a miner in one of the community gold mining owned by Mr. Jajang Suryana in Bukit Harapan. In the mining, he works in several divisions such as excavation, grinding, and sifting.“When I am assigned to work in the hole, I can stay there for 8 hours.  I even brought along food and drinks from home into the hole,” explained Yusef.

Whereas when he is assigned in the grinding process, he was assigned to process ores. During the processing, Yusef explains that he uses mercury to bind the gold during the grinding. “I touched the quicksilver (mercury), But I didn’t feel any side effects to my skin nor my health.” said Yusef as he showed his arms.“It’s safe,” he added with a smile.

Yusef also explains that besides excavation and grinding, he often gets involved in sifting process. He must stand in a man-made tub to clean the ores that have been collected out of the mud.“The process takes 7 hours,“ said Yusef.

Now Yusef really enjoys his life and work as a miner.  He manages to pay for his own living expenses even though he still lives in her mother’s house which is located several hundred meters away from the gold mining where Yusef work.

The Enumerators Overview in North Sulawesi

The journey to Tatelu and Tobongon in North Sulawesi is not similar to the enumerators in Central Kalimantan.  They did not get easy access to begin digging up information regarding child laborers and child workers.  However, the further approach will be done by the North Sulawesi Team to get real data in the field.

“North Sulawesi has a different culture from Central Kalimantan.  Regarding the celebration day of North Sulawesi, many workers working at the mine return to their respective regions.  The data of child laborer and child worker requires further research,” said Rikson, a local partner of AMAN.