I Want to Be a Housewife

Ayu dropped out of school at her 6th Grade because she decided to marry a 17 years old boy who worked as a miner in community mining of Bukit Harapan Village, Parenggean. When asked about the marriage decision, Ayu said, “Poor mama. People continuously gossiped about her. So instead of getting pregnant first, I’d rather marry.” 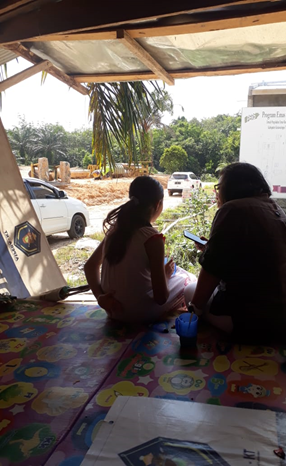 Ayu was born as the second child of two siblings.  Her father worked as a miner in community mining of Desa Bukit Village and her mother opened a small shop.  “When I was in the 4th grade, I often went to mining to help my brother sifting (ore).  I used to work there from 8 am to 4 pm,” Ayu reminisced.  However, Ayu admitted that she didn’t get payment from her work because she gave all of her money to her parents. “Only if I want to buy things, I will ask my parents,” Ayu stated.

By living and growing within the community gold mining in Bukit Harapan made Ayu realize that her living choices were limited. Her decision to marry was made because she felt assured by the boy of her choice, despite they only getting to know one another in 3 months. Ayu accepted the boy’s proposal and immediately agreed to be married by religion law.“I have had siri (unregistered) marriage, therefore we are officially husband and wife under religious law. We just don’t have marriage book yet,” she bashfully explained.“I don’t regret leaving school, because my willingness to get married is solid,” Ayu finished her story that afternoon.

Currently, Ayu’s pregnancy has entered its 4th month.  Even though her posture is small and looks young, she looks steadfast in taking care of her pregnancy. Ayu also states that she feels happy because she is finally able to have her own family and a soon to be born child. “Having a family is good because there will be someone who earns a living for myself, and therefore I don’t have to be dependent to my parents,” Ayu added. But until now, Ayu admitted that she and her husband still stay in the house of Ayu’s parents.

Basic Health Research (Riskesdas) 2013 conducted by the Health Ministry of Indonesia Republic reveals that among women of age 10-54 years, 2,6% are first married below the age of 15 years, and 23,9% married around the age of 15-19 years. Meaning, approximately 26% of underage women are married before the functions of their reproduction organs are optimally developed.

Legally, child marriage is legitimized under the Law of Indonesian Republic Number 1 in the Year 1974 Concerning Marriage. The law allows 16-year-old girls to marry, as stated in Article 7 Paragraph 1, “Marriage is only permitted if the male has reached 19 (nineteen) years old, and the female has reached 16 (sixteen) years old.” Whereas Article 26 of Law of Indonesian Republic Number 23 the Year 2002 concerning child protection, states that parents are required to protect children from early marriage. However, the article, like the Marriage Law, is not followed with the provisions of criminal sanctions and therefore it is almost meaningless in terms of protecting children from early marriage threats. The condition provides a crack for anyone, including parents, government officers, certain groups, or communities to falsify their citizenship documents, particularly regarding age, so that marriage can legally take place.

Indonesian child marriage rate is the second-highest after Cambodia. The child marriage must receive special and serious attention because it results in the loss of rights of girls such as the rights for education, playing, protection, security, and so forth, in addition to the impact of reproduction health and high-risk pregnancy.

Another impact received by girls marrying at an early age is threats to mental health. Girls often suffer stress when they leave their family and take the turn to take care of their own. In addition, child marriage also has an adverse impact on girls who marry at an early age, which the risk of domestic violence (KDRT).

Cases of Early Child Marriage are blooming in Indonesia. Central Kalimantan in particular ranks number two for the highest prevalence of child marriage after South Kalimantan, based on the social-economic survey results in 2017.

The Small-scale Gold Mining Communities in South Kalimantan, particularly the ones in Bukit Harapan Village, Parenggean, is one of the mining communities fostered by Yayasan Emas Artisanal Indonesia (YEAI); other than the mining communities in Tobongon and Tatelu, North Sulawesi. The programs related to gender strengthening and reproduction health often becomes the issues which are intensely socialized by YEAI to the communities.

Titik Hartini, Manager of Training and Development of the Foundation stated that the importance of awareness and parents role in determining the children’s future is one of the benchmarks of the gender strengthening program’s success.

“Yayasan Emas Artisanal Indonesia does not only assist the miners in stopping mercury use in gold refinery and replaced them with a non-mercury refinery but stopping contributing factors around the mining have also striven for betterment,” said Titik.

Although the Program Emas Rakyat Sejahtera funded by Global Affairs Canada has been running for almost 5 years, child marriages still happens within the miners community in Parenggean, yet Titik stated that a paradigm shift within a community order will take longer time due to the fact that extensive and continuous socialization on the knowledge of child marriage must be done before the changes in attitude and  behaviour occur. Despite culture holds an important role within a community, the knowledge about the impact of early child marriage and reproduction health will provide solutions for the survival of Indonesian’s next generations.